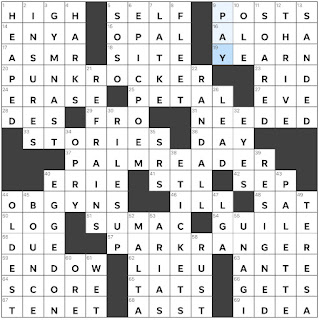 Theme Answers:
PUNK ROCKER (20A: Antiestablishment musician)
PALM READER (37A: Fortuneteller who interprets life lines)
PARK RANGER (57A: NPS employee)
Theme synopsis: Each theme answer is a profession whose job title can be abbreviated PR.
And now a word from our constructor:
May: I'm glad to be back in the USAT with a puzzle that hits close to home—or shall I say, work... maybe next time someone asks me what "working in PR" entails I'll draw inspo from 20A, 37A, or 57A!
Things I learned:
Random thoughts and interesting things:

Well, we didn't get any dessert in the LET'S EAT title progression, but this theme was so delightful I don't even mind! When I saw the title, I guessed the theme answers might be people with the initials PR, and was pleasantly surprised to discover I was wrong. I enjoyed seeing the variety of these PR PROS. Hmmm, someone please write a joke about, "A Public Relations ASST., a PUNK ROCKER, a PALM READER, and a PARK RANGER walk into a bar..." Other great answers today: EGGED ON, E-TICKETS, EPIC POEM, and RESIGNED (which may be a PR issue...). I always appreciate when constructors send me notes (Never required, always appreciated!) because I enjoy the insights they provide into the puzzle's background. Today it's a fun bonus to know that our constructor is a PR PRO. Thank you, May, for this puzzle that was a fabulous way to begin my Friday.
May Huang