Title: DO YOU REMEMBER? 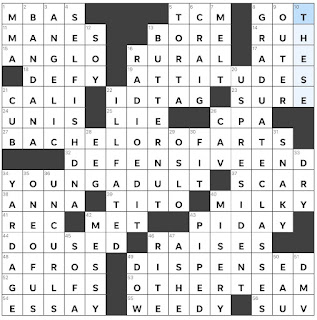 Theme Answers:
BACHELOR OF ARTS (27A: BA)
DEFENSIVE END (32A: DE)
YOUNG ADULT (34A: YA)
Theme synopsis: The clues for the theme answers, in order, are reminiscent of a repeated lyric (BA-DE-YA) from the Earth, Wind & Fire song, "September," which begins, "DO YOU REMEMBER / the 21st night of September?"
Things I learned:
Random thoughts and interesting things:

When I opened today's puzzle and saw the title, I started laughing. I have had the song, "September," stuck in my head ever since I wrote about it yesterday. I was wondering how "DO YOU REMEMBER / the 21st night of September?" would play out as a theme. A lovely "Aha!" moment when I came to the BA-DE-YA clues, and more laughter. In looking for information about "September," I found this NPR article in which one of the song writers, Alice Willis, says, "I learned my greatest lesson even in songwriting from [Maurice White], which was never let the lyric get in the way of the groove." In addition to the theme, I enjoyed the answers ONE OF US, GRADUATE CLASSES, BUTTERNUT, and ATTITUDES. Thank you, Erik, for this puzzle that was a delightful way to start my Wednesday morning on the 21st of September.
Erik Agard