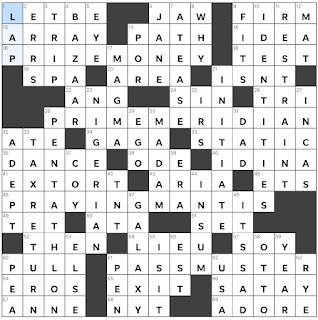 Theme Answers:
PRIZE MONEY (16A: Reality show incentive)
PRIME MERIDIAN (28A: Dividing line at zero longitude)
PRAYING MANTIS (46A: Insect sometimes kept as a pet)
PASS MUSTER (61A: Be good enough)
Theme synopsis: Each of the FOUR theme answers has a first word that starts with a P, and a second word that starts with an M.
Things I learned:
Random thoughts and interesting things:

I briefly considered being thematic and delaying the publication of this post until FOUR PM. This is a fun set of theme answers. When the theme is straightforward it is sometimes helpful in solving, as was the case today. It was useful to know that each theme answer started with the letter P. I enjoyed the clue for IDENTITIES (10D: They can be secret or mistaken). Other great answers: RESTRAINT (what I showed by not delaying this post?), BAZAAR, PENTATHLON, and GALAXY. Thanks, Rafa, for this puzzle that was a delightful way to start my Friday.
Rafael Musa