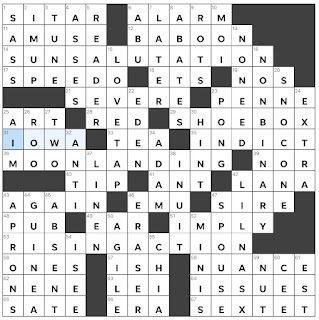 Theme Answers:
SUN SALUTATION (14A: Asana sequence that might lead off a vinyasa class)
MOON LANDING (36A: Televised event of July 20, 1969)
RISING ACTION (53A: Plot section before the climax)
Theme synopsis: The EARLY part (first word) of each theme answer can be placed in front of the word SIGN to form a term used in astrology: SUN SIGN, MOON SIGN, RISING SIGN.
Things I learned:
Random thoughts and interesting things:

SUN SIGN, MOON SIGN, and RISING SIGN are terms used in the discussion of astrology. If you're interested in learning more, here's an article that describes them. When I read the title of today's puzzle, I first thought of zodiac SIGNS, and then of traffic SIGNS. I was closer with my zodiac guess. A couple of clues I especially enjoyed today: (5D: Person a book's narrator might address) for READER, and (45D: Jokey response during roll call) for ABSENT. I also liked the answers LOVE TAP, NO NEED, NONBINARY, SNO CONE, and LIL NAS X. And, what an interesting grid shape! The right side of the grid almost evokes a crescent MOON. Thank you Pao and Brooke, for this puzzle that was a delightful way to begin my Monday.
Brooke Husic Pao Roy