Title: IN IT TOGETHER 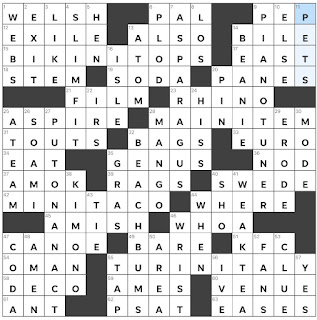 Theme Answers:
BIKINI TOPS (15A: Parts of two-piece swimsuits)
MAIN ITEM (28A: Agenda centerpiece)
MINI TACO (42A: Snack in a small shell)
TURIN, ITALY (55A: Holy Shroud city)
Theme synopsis: Each theme answer has the words IN and IT, and they are TOGETHER and spanning the two words in the answer.
Things I learned:
Random thoughts and interesting things:

This is a straightforward theme, and a classic USA Today theme type. The theme answers were fine, but I found many of the non-theme answers to be even more enjoyable: WEAK TEA, BEACH BUMS, PUT ON AN ACT, ASPARAGUS, and SLIM FIT. Thank you, Zhouqin, for this puzzle that was a great way to begin my Sunday.
Zhouqin Burnikel