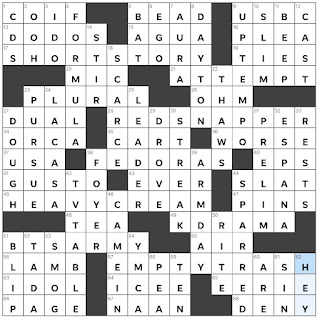 Theme Answers:
SHORT STORY (17A: One of 11 in Brandon Taylor's book, "Filthy Animals")
RED SNAPPER (28A: Colorful swimmer)
HEAVY CREAM (45A: Ingredient in bisque and biscuits)
EMPTY TRASH (57A: Button that frees up computer storage)
Theme synopsis: The first (LEFT-most) word of each theme answer can be placed in front of the word HANDED, giving us SHORT-HANDED, RED-HANDED, HEAVY-HANDED, and EMPTY-HANDED.
And now a word from our constructor:
Matthew: I hope you enjoy the puzzle! In the 17-A department, I also highly recommend Te-Ping Chen’s “Land of Big Numbers” in addition to Brandon Taylor’s “Filthy Animals.” Both are among my favorite books that I’ve read recently.
Things I learned:
Random thoughts and interesting things:

Even though I am not LEFT-HANDED, I enjoyed this puzzle's clever theme. In addition to the answers I've highlighted, I enjoyed STREAK, LA CASA, BTS ARMY, and FEDORAS. Thank you, Matthew for this puzzle that was a delightful way to begin my Saturday.
One more thing: It has snuck up on me, but tomorrow is the Boswords Summer Crossword Tournament. This year's event is being held both in person and online. I will be joining in virtually. It's not too late to sign up; if you're free tomorrow, join me! The Boswords events are always great!
Matthew Stock