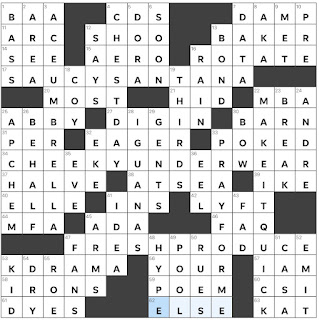 Theme Answers:
SAUCY SANTANA (17A: "Material Girl" rapper)
CHEEKY UNDERWEAR (34A: Bottoms style in between a thong and full-coverage)
FRESH PRODUCE (47A: Fruits and veggies at a farmers market)
Theme synopsis: The FRONT (first) word of each theme answer is a synonym for FLIP: SAUCY, CHEEKY, FRESH.
And now a word from our constructors:
Rafa: I’ve been trying to get 17-Across into a puzzle for a while, and I’m so glad I brought Brooke on board to develop this theme set!! I love every single long answer in this puzzle and Brooke’s incredible clue for 36-Down.
Brooke: I absolutely adore this puzzle for all the reasons Rafa mentioned (and because we made it together)! We packed so much stuff we were excited about into the grid and had an extremely fun time cluing -- my other favorite clues are 13a, 41a, 5d, 26d, and Rafa's amazing 22d fill+clue pair.
Things I learned:
Random thoughts and interesting things:
At the risk of being FLIP, what a SAUCY, CHEEKY, FRESH puzzle serving up a synonym theme today! I enjoyed this a lot. MAKE IT QUICK and PRAY FOR ME are delightful long answers. Thank you, Rafa and Brooke for this breezy puzzle that was a playful way to begin my Tuesday.