Title: THE SKIES WILL BREAK 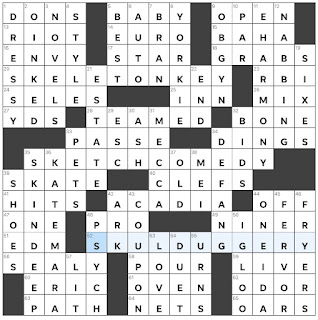 Theme Answers:
SKELETON KEY (20A: One can open many locks)
SKETCH COMEDY (35A: "I Think You Should Leave" genre)
SKULDUGGERY (52A: Trickery)
Theme synopsis: The word SKY is broken by each theme answer.
Things I learned:
Random thoughts and interesting things:

"THE SKIES WILL BREAK" is a 2016 song by Corrine Bailey Rae, and it makes a fun theme for this puzzle. I love the theme answer SKULDUGGERY; it's such a great word! Other enjoyable answers: SKIN DEEP, E-HARMONY, TEAMED, and OINKED. Thank you, Neville, for this puzzle that was a fantastic way to start my Saturday.
Neville Fogarty