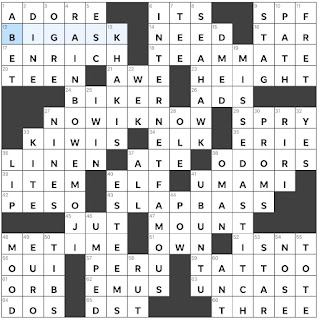 Theme Answers:
RAINBOW EMOJI (4D: Symbol of queer pride)
INTERNET FAMOUS (6D: Well-known from TikTok, for example)
MISSED A STITCH (19D: Messed up while knitting)
Theme synopsis: The first words of the theme answers can be placed in front of the word CONNECTION: RAINBOW CONNECTION, INTERNET CONNECTION, MISSED CONNECTION. The theme answers are vertical, so the CONNECTIONS are IN HIGH PLACES.
And now a word from our constructor:
Brooke: happy friday! i love so much of this puzzle, like the 1a/2a and 40a/3d clue pairs. i think the geography review will be extensive with this one — hope you don't mind, sally!
Things I learned:
Random thoughts and interesting things:

I really like this theme and its three fabulous theme answers. My first thought for 4-Down was RAINBOW flag, which obviously didn't fit. A little help from crossing answers revealed the fabulous RAINBOW EMOJI 🌈. I really like the answer INTERNET FAMOUS. INTERNET fame is such an interesting phenomenon. I have to admit that as a sometimes knitter, MISSED A STITCH induces a bit of anxiety. In addition to the answers I've highlighted (including all that geography!), I liked TEAMMATE, SEAHAWK, SLAP BASS, and BIG ASK. Thank you, Brooke, for this puzzle that was a delightful way to start my Friday.
Brooke Husic