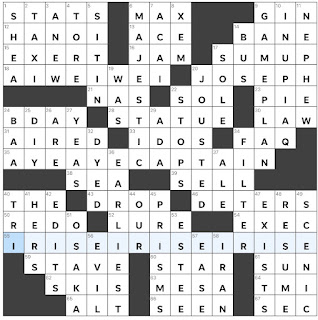 Theme Answers:
AI WEIWEI (18A: "Rohingya" filmmaker)
AYE AYE CAPTAIN (35A: "Yes, ma'am!" on a ship)
I RISE I RISE I RISE (55A: Last three lines of the Angelou poem that starts: "You may write me down in history / With your bitter twisted lies")
Theme synopsis: As we progress through the puzzle, each theme answer has increasing occurrences of the long I (EYE) sound.
And now a word from our constructor:
Brooke: see here
Things I learned:
Random thoughts and interesting things:

This is a lovely way to do a tribute puzzle. The puzzle has a primary theme - 1, 2, 3 EYES ON ME - that is clever and interesting. But the rest of the puzzle lets us know this puzzle was designed around the third theme answer, I RISE I RISE I RISE. It was fun to discover the Maya Angelou clues sprinkled throughout the puzzle. In addition to the themes today, I liked MAJESTIC, JOUSTED, GAME PLAN,  and SCENIC. This puzzle was a delightful way to begin my Monday. Happy B-DAY, Maya Angelou!
Brooke Husic