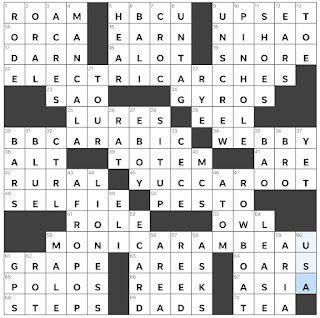 Theme Answers:
ELECTRIC ARCHES (20A: 2017 Eve Ewing book)
BBC ARABIC (30A: Radio service based in London and Cairo)
YUCCA ROOT (45A: Material for the ball in a Keshjee ceremony)
MONICA RAMBEAU (55A: Character played by Teyonah Parris in "WandaVision")
Theme synopsis: Each theme answer is FILLed with and AUTO in that it contains the word CAR.
And now a word from our constructors:
Mikkel: Brooke and I are back with our second crossword, putting the number of crosswords I thought I'd have this year to be about two more than I ever expected. The seed started with finding a good angle on 20A, and after some iterations we found some nice accompanying clues and went from there. I'm particularly fond of 4D, 29A, 9D, and 46D and continue to have a great appreciation for Brooke's expertise and skills when it comes to fully realizing the grid.
No cat clues this time, but Bellchime and Metronome remain key members of our collaboration process and want their contributions noted.
Brooke: I'm overjoyed to share a byline again with Mikkel! We had a great time creating this one. Like Mikkel said, we started with 20A and found a theme for it -- and we were super happy to discover 55A when we were looking for other theme answers. My favorite clues not yet mentioned are 14A, 61A, and 5D. And I'm happy to share that as of a week ago, the number of crosswords Mikkel will have this year will be at least three!
Things I learned:
Random thoughts and interesting things:

On my phone, I consider AUTO FILL a mixed blessing. It saves me time, but also always insists I mean "we're" when I actually mean "were." However, in today's puzzle, AUTO FILL is strictly positive, providing the opportunity to find four CARs hidden in a nice set of theme answers. I did not write about the entry PINHOLE (10D: ___ camera) because I've geeked out about that entry previously. However, I do want to mention that World PINHOLE Photography Day was a week ago. Check out the Gallery here.
(Okay, so I did actually write about it...) As I mentioned in my highlights, I really enjoyed the cluing today; so many examples of clues that highlight specific information, but also allow all solvers to be successful. This puzzle was a delightful way to begin my Friday.
Brooke Husic Mikkel Snyder