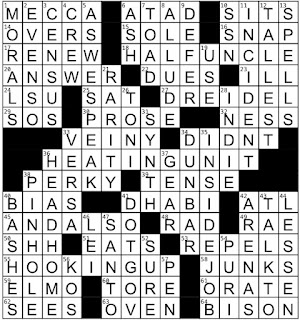 Theme Answers:
HALF-UNCLE (18A: Extended family member)
HEATING UNIT (36A: Source of warmth)
HOOKING UP (55A: Entangled, in a way)
Theme synopsis: The first word in each theme answer begins with an H, and the second word begins with a U, YOU KNOW.
Things I learned:
Random thoughts and interesting things:
Geography review:
Sometimes in life, who you know makes a difference. But today, it's not who you know, but HU, YOU KNOW! The title phrase of today's puzzle is a chant used to refer to Howard University (HU). Howard University is a historically black college and university (HBCU) in Washington, D.C. Howard University's alumni include TONI Morrison and Paul Laurence DUNBAR, as mentioned above, and also Vice President Kamala Harris. HU can also refer to Hampton University, an HBCU in Hampton, Virginia. Hampton University's alumni include Booker T. Washington and Rashida Jones. There is a football rivalry between Howard University and Hampton University called "The Real HU." I enjoyed today's puzzle, and learning more about HU. I also enjoyed learning about Worldwide Pinhole Camera Day. Other things of note: I enjoyed the paired cluing of OVERS (14A: Opposites of unders) and SOLE (15A: Underside of a shoe), and the related answers RENEW and DUE. I liked AS WE SPEAK and INSIDE JOB. It was also fun to see the word ANSWER as an ANSWER. This puzzle was a delightful way to start my Thursday.
Erik Agard