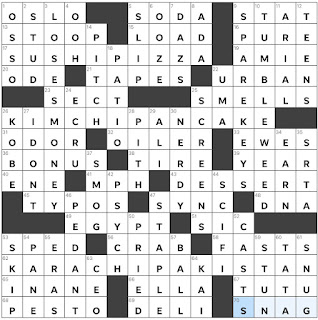 It's been awhile since I've done a HIP BRIDGE - an exercise that strengthens the hamstrings, abs, lower back, and glutes - so it took me a moment to recall what the title was referring to. Fortunately, it was not necessary to do a HIP BRIDGE to discover the HIP BRIDGEs in the puzzle. In addition to the answers I've already highlighted, I enjoyed SPARE KEYS and PEDANT. I am now hungry for some Häagen-DAZS ice cream for some reason. This puzzle was a fine way to begin my Wednesday.
One more thing today: The folks at The Inkubator have a new book of crosswords that was released yesterday: 100 Audacious Puzzles. The book contains puzzles by an amazing group of women and nonbinary creators, and also a puzzle by me. Today's constructor, Zhouqin Burnikel, is one of the constructors, as are many other USA Today constructors. It was exciting to finally see this book yesterday! It's beautiful, and I look forward to solving the puzzles. 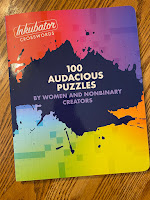