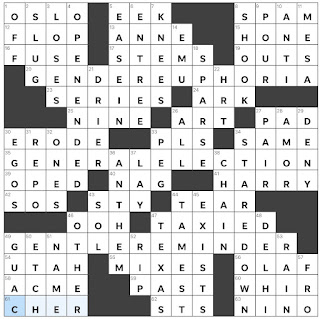 Theme Answers:
GENDER EUPHORIA (20A: Feeling of joy that might be caused by a haircut or new pronouns)
GENERAL ELECTION (35A: Political contest after a primary)
GENTLE REMINDER (49A: Way to kindly jog someone's memory)
Theme synopsis: The FIRST three letters of each theme answer are GEN.
Things I learned:
Random thoughts and interesting things:

When I saw the puzzles title, I thought the theme answers might be related to Generations, and it was fun to discover I was wrong. A delightful set of FIRST GEN answers here. I like the grid shape as well, with those "steps" of black squares. Also enjoyable: OPEN ENDED, STARE DOWN, and EXISTS. This puzzle was a fabulous way to begin my Monday.
Geography Quiz Answer: The five National Parks in UTAH are Zion National Park, Arches National Park, Bryce Canyon National Park, Canyonlands National Park, and Capitol Reef National Park. I have visited them all. They each have their own unique features making them amazing places to explore.
Rafael Musa