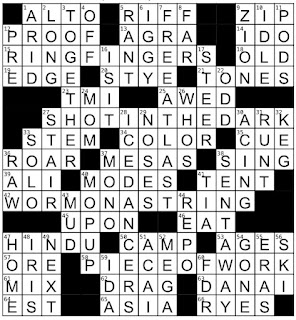 Theme Answers:
RING FINGERS (15A: Places for some wedding bands)
SHOT IN THE DARK (27A: Wild guess)
WORM ON A STRING (42A: Fuzzy toy also known as a Squirmle)
PIECE OF WORK (58A: Difficult or complicated person, so to speak)
Theme synopsis: If you LEND the word EAR to each theme answer, and place it before the answer's first word, you get a new word. We have EARRING, EARSHOT, EARWORM, and EARPIECE.
And now a word from our constructors:
Rasa: I met Brooke in college when Brooke was my orientation leader. Many (many!) years passed (of quiet and lonely crossword solving) and I saw Brooke’s name on an NYT puzzle that I was solving and decided to take the plunge into the constructing world and ask her about it. Brooke was so enthusiastic and helpful in acquainting me with the constructing world! She encouraged me to sign up for beginner constructing classes and onboarded me with many, many conversations for our first of several collaborations for USA Today!
Brooke: It was super great to reconnect with Rasa when she reached out to me about constructing and it’s been so so fun to make puzzles together! This theme was Rasa’s idea; I really love WORM ON A STRING as a theme answer. I’m beyond happy to have been a part of Rasa’s first grid, and she has more great ones coming in a variety of outlets!! Until then you should definitely check out her midi on Matthew’s site today!
Things I learned:
Random thoughts and interesting things:
Geography review:
I really enjoyed the theme of this puzzle, and its solid, enjoyable theme answers. I liked the pairing of the clues for RING FINGERS and I DO. SHOT IN THE DARK is a nice answer, and when it immediately came to my mind it turned out to not be a [Wild guess], but rather, a correct answer. It was fun to be reminded of WORM ON A STRING. And PIECE OF WORK is such a great answer. We can probably all think of someone we know who fits this description. Smooth fill overall today, and I enjoyed the cluing. Congratulations to Rasa on her USA Today puzzle debut today! This puzzle was a delightful way to begin my Monday.
Brooke Husic Rasa Guarnaccia