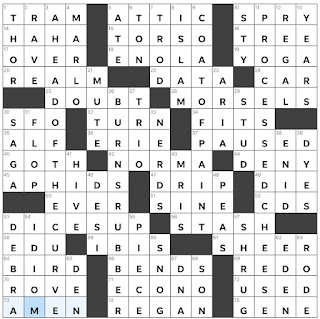 Theme Answers:
AHEAD OF THE CURVE (3D: Forward-thinking)
COAT OF PAINT (9D: Room refresher)
PROCESSED CHEESE (11D: Kraft American singles, e.g.)
BURNS RUBBER (26D: Drives away with a squeal)
Theme synopsis: The last (LOW) word of each theme answer can precede the word BALL, giving us a CURVE BALL, a PAINT BALL, a CHEESE BALL, and a RUBBER BALL.
And now a word from our constructor:
Wendy: This puzzle was a new challenge for me -- it is the first time that I have created a grid using vertical themers.
The middle where BURNS RUBBER and COAT OF PAINT share a horizontal entry, was particularly tricky. I was delighted that NORMA worked to bridge that space, since NORMA was my mom's name :). I gave another hat tip to my mom in this puzzle with the clue for IDIOM ("Hold your horses") -- since that was one of her favorite phrases (which makes very little sense since she was from Brooklyn....). I was also able to use my daughter's favorite emoji (SHRUG), so my family is well-represented in this puzzle.
As always, Erik and Amanda and the rest of the USA Today team helped shape this puzzle. Many thanks to all.
Things I learned:
Random thoughts and interesting things:

A fun set of theme answers today leading to fun discoveries. Suddenly I'm craving a CHEESE BALL... I enjoyed reading Wendy's notes about the answers that had particular meaning to her. The joy of solving crosswords made by a variety of constructors is having puzzles with a variety of personalities. This puzzle was a delightful start to my Saturday.
Wendy L. Brandes