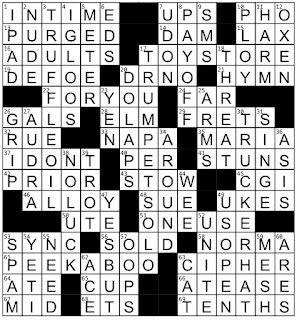 Theme Answers:
TRUFFLE OIL (3D: Umami topping for fries)
TRUMPET SOLO (17D: Clora Bryant improvisation)
TRUCKER HAT (30D: Breathable cap)
Theme synopsis: Each theme answer begins with the letter string TRU-. Since the theme answer are vertical, TRU is at the top, or NORTH part of the answer.
Things I learned:
Random thoughts and interesting things:
Geography review:
* These sentences were written using the ROT13 CIPHER. Decoded they read: What if I were to use a CIPHER to write my blog? That might be confusing...
I think it's a nice touch that the theme answer TRUMPET SOLO is featured in the center of the puzzle, just as a SOLO should be. In addition to the theme answers today, there was a lot of fill I particularly liked, such as PEEKABOO and TOY STORE. There's something here for all ages, as we also have ADULTS. This puzzle may be trying to make enemies, with DEFOE (19A: Surname that contains a synonym for "enemy") and DR. NO (20A: Bond villain) and ARES (60D: Enemy of Wonder Woman), but NO LUCK (38D: "It didn't work") I enjoyed this puzzle and was delighted to start my day by solving it.
Enrique Henestroza Anguiano