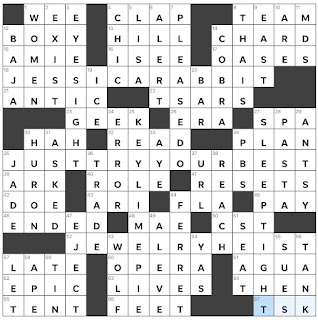 Theme Answers:
JESSICA RABBIT (18A: Toon who said "I'm not bad, I'm just drawn that way.")
JUST TRY YOUR BEST (35A: "Don't worry if it's not perfect")
JEWELRY HEIST (52A: Doris Payne job)
Theme synopsis: The word JEST is found AROUND (on the outer edges of) each theme answer.
Things I learned:
Random thoughts and interesting things:

I'd say this puzzle doesn't JOKE AROUND, but it actually does. A fun theme, and I also found it interesting that we just saw JEST clued as [Joke around] in yesterday's puzzle. I liked the long down answers of KEY LIME PIE, PLEASE DO, and SLEEP TIGHT. All kidding aside, this puzzle was a lovely way to begin my Wednesday.
Zhouqin Burnikel