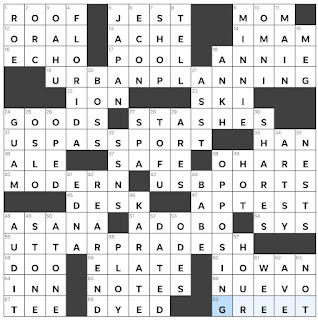 Theme Answers:
URBAN PLANNING (19A: Field concerned with city design)
US PASSPORT (31A: Travel document for American citizens)
USB PORTS (43A: Plug-in points on some computers)
UTTAR PRADESH (55A: Indian state that's home to the Taj Mahal)
Theme synopsis: Each theme answer begins with the letter U, and the last word in the theme answer begins with the letter P.
Things I learned:
Random thoughts and interesting things:

From the puzzle's title, I was expecting vertical theme answers. However, as so often happens, the puzzle surprised me with a different variation on the theme. I particularly enjoyed seeing UTTER PRADESH as a theme answer. There was a lot of geography in today's puzzle...good thing I've been reviewing my geography skills for almost two years now! I liked the combination of JEST (5A: Joke around) near the beginning of the puzzle, and NOT (63D: "Just joking!") at the end. I'm NOT joking when I say this puzzle was a delightful start to my Tuesday.
Rafael Musa