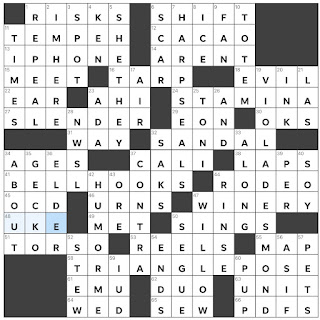 Theme Answers:
BELL HOOKS (41A: "Ain't I a Woman" author)
TRIANGLE POSE (58A: Yoga asana named for a shape)
HARP SEALS (7D: Arctic marine mammals)
VIOLA DESMOND (19D: Businesswoman who challenged segregation at a Nova Scotia movie theater in 1946)
Theme synopsis: The first word (INTRO) of each theme answer is an instrument used to play MUSIC. Our INTRO MUSIC today is provided by a BELL, a TRIANGLE, a HARP, and a VIOLA.
And now a word from our constructors:
Will: I'm delighted to have collaborated with my friend (and now fellow New Yorker constructor) Brooke Husic for my second USA Today puzzle (and Brooke's 100th!). This puzzle was inspired by the late bell hooks, but as a Canadian, I was also happy to work the local hero Viola Desmond into the theme.
Brooke: I've written before about how crucial Will's been to my crossword journey from the beginning (my very first puzzle was in the USAT exactly 2 years and 1 week ago!) and am so happy for our joint byline to have its USAT debut! I'm glad Will was down for the diagonal arrangement and big blocks in the corner and am so happy with the fill and clues!
Things I learned:
Random thoughts and interesting things:

It's always nice to have some INTRO MUSIC to begin my day. What a great set of theme answers here. This puzzle features diagonal symmetry; it is symmetrical across a diagonal line from the top left corner to the bottom right corner. In addition to the theme and the answers I've highlighted above, I enjoyed I'M HERE, SHE/THEY, and SEGUE. This puzzle was a delightful way to begin my Thursday.
As Will hinted at in his note, The New Yorker has expanded its crossword, and is now offering a daily puzzle Monday through Friday. Will Nediger, Brooke Husic, and Paolo Pasco have been added to an already stellar slate of constructors. Good news for the crossword world!
Brooke Husic Will Nediger