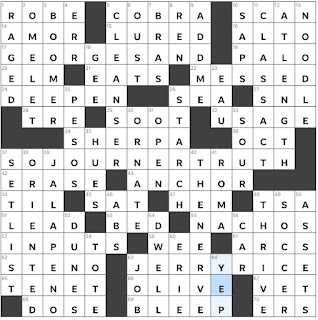 Theme Answers:
GEORGE SAND (17A: French novelist played by Judy Davis in "Impromptu")
SOJOURNER TRUTH (37A: Activist who, contrary to popular belief, most likely didn't say "Ain't I a woman?" in her 1851 speech)
JERRY RICE (63A: NFL Hall of Fame from Crawford, Mississippi)
Theme synopsis:
The last word of each theme answer is GRAINY. We have a GRAIN of SAND, a GRAIN of TRUTH, and a GRAIN of RICE.
Things I learned:
Random thoughts and interesting things:

Quite the GRAINY BUNCH of theme answers today. Interesting to note that DUNES (52D: Desert mounds) are composed of many GRAINs of SAND. In addition to the answers highlighted above, I also liked BOOMER, CLASS ACT, and JALAPENO. This puzzle was an enjoyable way to begin my Sunday morning.
Many thanks to Brooke Husic and Norah Sharpe for guest blogging the last two days! I always enjoy reading someone else's take on the puzzle.
Zhouqin Burnikel