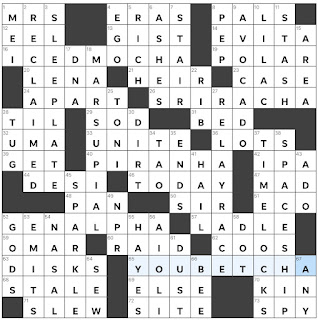 HA, HA, HA, HA, HA! This puzzle definitely has the LAST LAUGH. Fun to see five enjoyable theme answers. SRIRACHA and PIRANHA are always spelling challenges for me, so I was thankful for crossing answers. One of the subtle things I like about USA Today puzzles is when puzzles are run in sequences of related titles. We see this today with LAST LAUGH following yesterday's FAMILY FIRST. We also saw this recently with the SPRING FORWARD and FALL BACK puzzles that ran on consecutive days, and with the sequence of puzzles THREE WISHES, FOUR OF A KIND, and TIGHT FIVE. Even though each puzzle stands alone, it's a nice extra touch. Was this puzzle an enjoyable way to begin my Tuesday, and did it make me glad I didn't SLEEP LATE? YOU BETCHA!