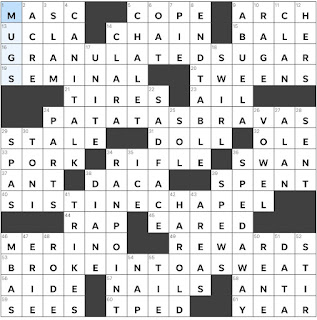 Theme Answers:
GRANULATED SUGAR (16A: Refined baking ingredient)
PATATAS BRAVAS (24A: Dish that may be served alongside tortilla espanola)
SISTINE CHAPEL (40A: Its chimney is watched for papal news)
BROKE INTO A SWEAT (53A: Started to perspire)
Theme synopsis: A nickname for a FAMILY member appears at the start (FIRST) of each theme answer. Our puzzle FAMILY includes GRAN, PA, SIS, and BRO.
And now a word from our constructors:
Beth: This is my first crossword puzzle ever! I signed up for the Crossword Puzzle Collaboration Directory mentorship on a little bit of a whim after solving crossword puzzles for years. As a queer woman it felt really welcoming and was super easy as a process - I think it’s such a great model for taking action to diversify a field. Kim has been wildly patient and helpful and it was super fun working together on this. A fave clue is 5-Down since snowcation is a fun word in and of itself to me. Also, into 42-Down since it reminds me of reading to my kiddo.
Kim: Beth is being very modest. This was one of the first theme ideas she came to me with, and she was a real natural in terms of finding really fun fill for this grid. A pleasure to bring you the first of hopefully many Beth Goodney puzzles!
Things I learned:
Random thoughts and interesting things:

I enjoyed this FAMILY FIRST theme in which the theme uses only part of the first word of each theme answer. I'm a bit embarrassed to admit that at first I tried to shorten PATATAS BRAVAS to "PATA" and couldn't figure out what family member that was a nickname for...oh, wait. I then had an "AHA moment." (See yesterday's write-up.) Other answers I especially liked: CAN I TALK, CHALET, SAD FACE, and TWEENS. Congratulations to Beth Goodney on her crossword puzzle debut! This puzzle was a delightful way to begin my Monday.
Elizabeth Goodney Hoang-Kim Vu