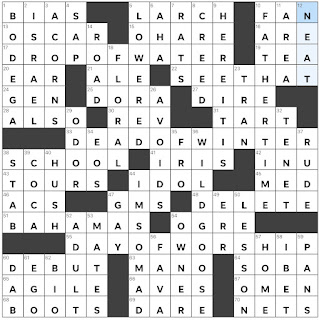 Theme Answers:
DROP OF WATER (17A: Bead not used for jewelry)
DEAD OF WINTER (33A: Cold season's coldest period)
DAY OF WORSHIP (55A: Time for sermons)
Theme synopsis: Each theme answer has the initials DOW.
Things I learned:
Random thoughts and interesting things:

The DOW COMPONENTS in this puzzle are not companies that are part of a stock index, but the initials of the theme answers. I liked the consistency provided by all of the theme answers being of the format ___ OF ___. Other answers I liked today: HERE IT IS, FLORAL, FATHER TIME, WILD GOOSE, and I'M SO MAD. This puzzle was an enjoyable way to begin my Sunday.
Zhouqin Burnikel