Title: IT'S GOING DOWN 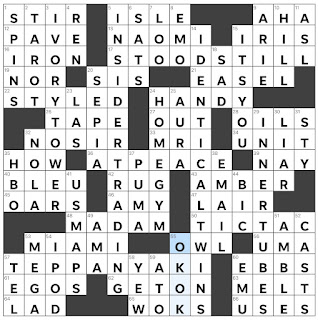 Theme Answers:
IVORY TOWER (3D: Metaphor for academia)
INSIDER TRADING (5D: Crime in the show "Billions")
IDENTICAL TWINS (14D: Siblings with the same DNA)
INNER TUBES (29D: Inflatables for lazy rivers)
Theme synopsis: Each theme answer consists of a word beginning with I- followed by a word beginning with T-. Since the theme answers are vertical, the ITS are GOING DOWN.
And now a word from our constructors:
Brooke & Amanda: Last we checked in with our romantic saga we were schlepping home ... and now, unfortunately, it's going down. At least we got to make this great grid about it! Our fave answers are TEPPANYAKI and IT'S YOU!, our fave clues are 5A and 1D, and we hope you read the 55D clue as a revealer of sorts. :)
Things I learned:
Random thoughts and interesting things:
Geography review:
An initial theme today with nice solid theme answers, of which IDENTICAL TWINS was my favorite. Lots of fun fill in the grid as well: HOME GYM, IT'S YOU, AT PEACE, and TEPPANYAKI. And, of course, the enjoyable cluing I've come to expect from Brooke and Amanda collaborations. Shoutout to SPINS (1D: Shows off a twirly dress) and STOOD STILL (17A: Acted frozen in freeze tag). OK, OK! This puzzle was a delightful way to begin my Saturday.
Amanda Rafkin Brooke Husic