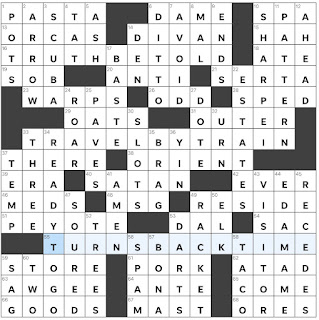 Theme Answers:
TRUTH BE TOLD (16A: "Honestly...")
TRAVEL BY TRAIN (33A: Ride the Shinkansen, for example)
TURNS BACK TIME (55A: Finds the Fountain of Youth, maybe)
Theme synopsis: Each theme answer is a phrase with the initials TBT.
Things I learned:
Random thoughts and interesting things:

TRUTH BE TOLD, it may feel like one TURNS BACK TIME if you TRAVEL BY TRAIN. We usually see Zhouqin Burnikel's puzzles on Sundays and Wednesdays. When we don't, there's usually a good reason for the switch. When I saw the title and byline of today's puzzle I knew why yesterday's delightful puzzle was by Enrique Henestroza Anguiano instead of Zhouqin. TBT is short for Throwback Thursday, a social media trend of posting nostalgia with the hashtag #TBT or #ThrowbackThursday. Of course this puzzle needed to run on a Thursday! My favorite theme answer today was TURNS BACK TIME, since it not only has the initials TBT, but also encapsulates the concept of Throwback Thursday. As you can see, I learned quite a bit from today's puzzle. It was an enjoyable way to begin my Thursday.
Zhouqin Burnikel