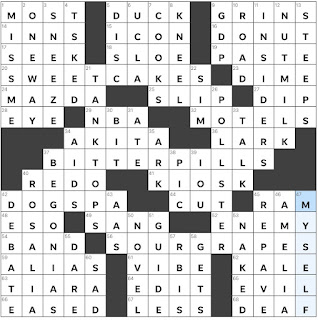 Theme Answers:
SWEET CAKES (20A: Term of endearment)
BITTER PILLS (37A: Outcomes that are hard to swallow)
SOUR GRAPES (56A: Sore losers attitude)
Theme synopsis: The first word of each theme answer is one of the five TASTE modalities: SWEET, BITTER, and SOUR. (The other two TASTEs are salty and savory, also known as umami)
Things I learned:
Random thoughts and interesting things:

I enjoyed today's theme. I especially like that the theme answer are all things you "could" eat - CAKES, PILLS, and GRAPES, though the phrases have non-food meanings. Appropriately for a puzzle titled TASTE MAKERS, there were a number of food and drink references: Zhangcha DUCK, a glazed or cream-filled DONUT, SLOE gin fizz, KALE, and NUT MILK. We also have "Too many COOKS in the kitchen!" (7-Down) and ATE (31D: Got your grub on). This puzzle was a deliciously fun way to begin my Wednesday.
Enrique Henestroza Anguiano