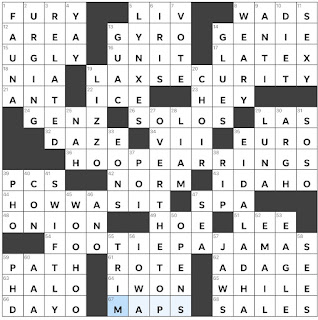 Theme Answers:
LAX SECURITY (19A: Advantage in pulling off a heist)
HOOP EARRINGS (36A: Door knockers, for example)
FOOTIE PAJAMAS (54A: One-piece sleepwear)
Theme synopsis: The first word of each theme answer is a nickname for a type of SPORT. Our SPORTS SHORTS are LAX (lacrosse), HOOP (basketball), and FOOTIE (Association football, Australian rules football, or rugby league football).
Things I learned:
Random thoughts and interesting things:

I felt a little bit like Indiana Jones when I opened today's puzzle, though instead of saying "Why did it have to be snakes?" I thought, "Why did it have to be SPORTS?" I've often said that "(Almost) everything I've learned about SPORTS I've learned from crossword puzzles." It's definitely not my strong suit. Taking that into consideration, if I've missed an aspect of the theme today (or completely gotten it wrong), please let me know! Of course, there are plenty of things to enjoy in every crossword, and as you can see from the number of answers I've highlighted, I found plenty to enjoy, and this puzzle was a great way to begin my Friday.
Erik Agard