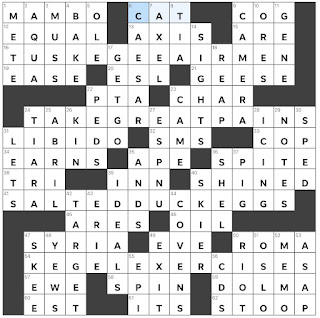 The title of the puzzle tipped me off to search for KEGs stored in the theme answer, and I found them. An interesting set of theme answers today anchoring a fun puzzle. I've recently discussed that the use of paired clues can add a feeling of cohesiveness to a puzzle. We have a couple of fun examples today with a pair of salad clues - the salad clue for CAT and CAESAR (6D: Salad with anchovies and croutons) - and a pair of cake clues - BAKE (4D: Verb that aptly rhymes with "cake") and ICING (28D: Cake coating). This puzzle was a fabulous way to begin my Friday.
Stella Zawistowski