Title: IT STARTED OUT ALRIGHT 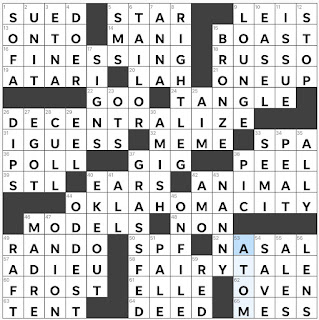 Theme Answers:
FINESSING (16A: Maneuvering delicately)
DECENTRALIZE (26A: Distribute more broadly)
OKLAHOMA CITY (44A: Home of the NBA's Thunder)
FAIRY TALE (58A: Story that ends with "happily ever after")
Theme synopsis: Each theme answer STARTS with a synonym for ALRIGHT. Things are, FINE, DECENT, OK, FAIR.
Things I learned:
Random thoughts and interesting things:
Geography review:
Regardless of its title, this puzzle started out more than ALRIGHT, and ended that way as well. I really enjoyed the theme today. I liked that the hidden words were only parts of words - it makes the discovery of the words feel like uncovering hidden treasure. Smooth fill and enjoyable cluing all around made this puzzle a delightful way to begin my Wednesday.
Be sure to visit the blog the next few days, as I have a treat for you. I am taking a few days off, and I have lined up a stellar group of guest bloggers to discuss the puzzles with you in my absence. One of the things I enjoy about having guest bloggers is reading someone else's take on the puzzle. I am looking forward to reading the blog along with you the next few days! (I love writing the blog - I hope you can always tell that - but I'm also looking forward to a few days off.)
Hoang-Kim Vu