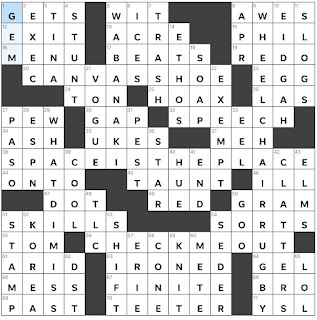 Theme Answers:
CANVAS SHOE (20A: Piece of casual footwear)
SPACE IS THE PLACE (38A: Sun Ra film with a rhyming title)
CHECK ME OUT (56A: Self-promotional phrase)
Theme synopsis: We have a SLATE of theme answers whose first words can follow the word BLANK. This gives us BLANK CANVAS, BLANK SPACE, and BLANK CHECK.
And now a word from our constructors:
Brooke & Erik: we're both honored to contribute to These Puzzles Fund Abortion 2 -- the campaign is now available here! now off to go listen to "Blank Space" on repeat all day...
Things I learned:
Random thoughts and interesting things:

All crossword puzzles are somewhat of a BLANK SLATE, waiting to be solved, but this one especially so. In addition to the enjoyable theme, the asymmetric grid allows the nice grid-spanning vertical bonus of WHEELCHAIR RUGBY. There's a lot to like in this puzzle, and it was an enjoyable way to begin my Saturday.
Brooke Husic Erik Agard