Title: WE STARTED THIS 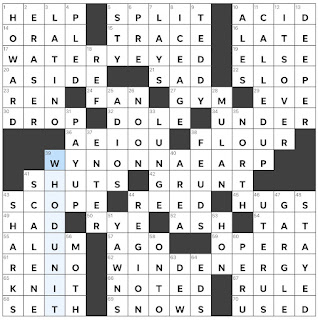 Theme Answers:
WATERY EYED (17A: Teary)
WYNONNA EARP (39A: WayHaught's TV show)
WIND ENERGY (62A: Alternative to solar power)
Theme synopsis: In each theme answer, the first word begins with a W, and the second word begins with an E, meaning WE STARTED THIS.
And now a word from our constructor:
Claire: I'm excited to be back in the USA Today, and I had a lot of fun making this. My favorite clue is 43-Down, and I always love being able to fit a 39-Across reference into a puzzle.
I've spent the past few months working on These Puzzles Fund Abortion Too, a puzzle pack (featuring many names that will be familiar to regular solvers of the USA Today crossword!) that will raise money for seven different abortion funds. Please check out our website for more info. Our donation page is going live very soon, and I can't wait to for you to solve these fantastic reproductive-justice-themed puzzles while we fundraise for much-needed access to safe, affordable abortion.
Random thoughts and interesting things:

Well, I for one am glad WE STARTED THIS. A fun initial theme here with interesting theme answers. In addition to the theme and the answers I've already highlighted, I liked the answers, CALLED UP, IT'S OVER, and SCALENE. This puzzle did not induce YAWNS; it was a fabulous way to begin my Friday.
I am glad Claire mentioned the puzzle pack, These Puzzles Fund Abortion Too, which will be available in a few days. Through this project, you can support reproductive rights and enjoy fantastic puzzles - that's a win/win. I solved last year's puzzle pack in one enjoyable afternoon, and am looking forward to this year's puzzles!
Claire Rimkus