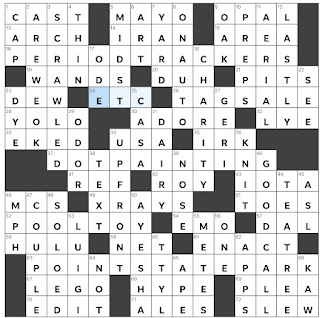 Theme Answers:
PERIOD TRACKERS (16A: Cycle-monitoring tools)
DOT PAINTING (37A: Aboriginal art style)
POINT STATE PARK (63A: Pittsburgh landmark at the confluence of three rivers)
Theme synopsis: The first words of the theme answers are synonymous, and can all be used to describe the characters in an ellipsis...PERIOD, DOT, POINT.
And now a word from our constructors:
Brooke & Rachel: We're so excited to share this puzzle with the world! We love all of the theme answers — Rachel is particularly pleased to highlight 63A, a place that is so visually iconic and important to her that she now owns multiple pieces of artwork about it (if you are unfamiliar with it, please google because it's lovely!). We are also happy to reference an ABBA song in 56D.
Things I learned:
Random thoughts and interesting things:

Did you wonder if there was a mistake when you saw the title of today's puzzle? My first guess was that we would see three phrases hiding the word DOT. I was one-third correct! A fun, creative theme, with three great theme answers. In addition to the answers I've highlighted above, I liked ARE WE OK, SCRAWLED, UP FRONT, TEA TREE, and GOOD CALL. This puzzle was a delightful way to start my Monday. g2g, TTYL!