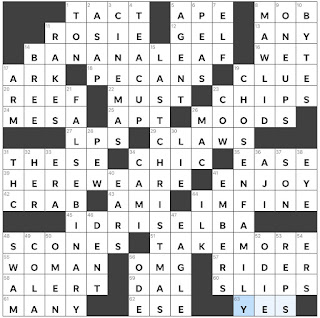 Theme Answers:
LAST CHRISTMAS (15D: Chart-topping holiday song by Wham!)
CHOSEN FAMILY (19A: Queer friend group, e.g.)
FALSE BINARY (21D: Assumption that there are two genders, e.g.)
Theme synopsis: The last word of each vertical theme answer (the TRUNK, so to speak) is a type of TREE. We have a BINARY TREE, a CHRISTMAS TREE, and a FAMILY TREE.
And now a word from our constructors:
Enrique & Brooke: We’re excited to share this evocatively grid-arty puzzle in the USAT for our second collaboration here! We love the “trunk” of black boxes at the bottom of the grid, the “canopy” in the top-left corner, and BANANA LEAF as an added wink up there too. We’re also happy to have gotten CHOSEN FAMILY into the puzzle, clued in a meaningful way. Other highlights for us are the dashing IDRIS ELBA, and the idea of an eager treat-giver at Halloween encouraging us to TAKE MORE.
Things I learned:
Random thoughts and interesting things:

What a great set of theme answers for this theme set. If I had to choose a favorite, it would be CHOSEN FAMILY (clued wonderfully here), but I'm glad I don't have to choose, because I like them all. I also appreciate the grid art elements Enrique and Brooke mention in their notes. It was a nice touch that all of the vertical theme answers were situated so they touched the bottom of the grid, rooted there, as it were. In glancing at the grid just now I notice this grid tree has a BANANA LEAF and bears PECANS! Lots of enjoyable fill: TAKE MORE, I'M FINE, ENJOY. HERE WE ARE, this puzzle was a delightful way to begin my Friday.