Title: I BEFORE E 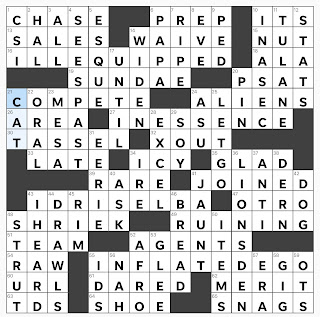 Theme Answers:
ILL-EQUIPPED (16A: Lacking the right tools)
IN ESSENCE (27A: Basically)
IDRIS ELBA (43A: Actor in "Beasts of No Nation")
INFLATED EGO (55A: Too-large sense of self-importance)
Theme synopsis: In each theme answer, the first word begins with the letter I, and the second word begins with the letter E.
Things I learned:
Random thoughts and interesting things:
Geography review:
When I hear the "I BEFORE E except after C" spelling rule, I always think of the word "weird," since it is one of the many words that breaks this rule. There is nothing weird about this enjoyable I BEFORE E puzzle, however! Some fun theme answers here, especially INFLATED EGO. SEES PAST and LION'S DEN were nice non-theme answers. The puzzle did make me hungry, with its mention of pie ALA mode and a hot fudge SUNDAE. I liked the multiple musical references today as well. This puzzle was a delightful way to begin my Saturday.
Hoang-Kim Vu