Title: A CUT ABOVE 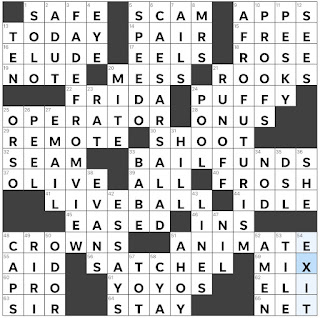 Theme Answers:
FADE FROM VIEW (3D: Disappear into the distance)
CAESAR SALAD (6D: Romaine-based dish)
AFROFUTURISM (9D: Genre of Octavia E. Butler books)
Theme synopsis: The first part of each theme answer - the part ABOVE the rest, since the answers are vertical - is a type of hairCUT.
And now a word from our constructors:
Brooke: We have a game for you! Of Adesina, Brooke, and Erik, guess who wrote which sports-related clues in today's puzzle:
18A Olympic thrower Alex : ROSE
30A Try to score a goal : SHOOT
41A Something in play, in sports : LIVE BALL
48A Symbols in Kansas City Royals logos : CROWNS
56A Negro League icon Paige who started an MLB game at age 59 : SATCHEL
65A Part of a basketball hoop : NET
13D Number of NBA championships won by Sam Jones : TEN
47D Soccer score word : NIL
Games aside, we're so happy to be back in the USAT and are grateful to Erik for his fabulous editing! Answers at the bottom of the page. :)
Adesina: First off, love the game!! Brooke and I talked after our first collaboration about how enough solvers who know the both of us would be surprised if they knew that the majority of clues that ended up having sports references were created by her and not me. Then we thought, “shoot, this could be a trend!” Now you’re all in on the secret…at least for this grid.
Not too much else to add, other than I was glad that I could take you into the barber shop with the one theme answer that is nearest to my heart, CAESAR SALAD, since a (dark) caesar is my regular haircut. Was a little worried that that entry might not make the cut (for real, pun not intended) since I believe that popular haircuts that Black people sport, outside of fades and afros, were going to be unknown to enough solvers. But once Erik gave it the green light, both Brooke and I were pumped!
Last note: I usually stay quiet about crosswords on my social media pages and let the many wonderful constructors in our ever-diversifying community talk about their crosswords as well as encourage other constructors’ endeavors. The last time I did a collab for a USA Today grid, and then dared to say the words “I speak for everyone” when talking about how great it was working with my co-constructor, that was met with disdain by at least one fellow constructor who decided it was not worth hearing my takes on crosswords (or anything for that matter). If any of you come across people like that, please do me a favor: ENCOURAGE THE HELL OUT OF YOUR FELLOW CONSTRUCTOR AND MAKE YOURSELVES HEARD EVEN LOUDER! Love the positivity many constructors bring to social media, and don’t let anyone interrupt your peace because they themselves don’t have peace.
Things I learned:
Random thoughts and interesting things:

Between Brooke and Adesina's notes, and my write-up, this is turning out to be a long post! I hope you're still with us! I had to laugh at the sports quiz today. (In case you're wondering, constructors are good about letting me know when their notes contain spoilers, so I know not to read them until after I solve.) Whenever I see Adesina's name on a puzzle, as a solo constructor or collaborator, I know to expect some sports content. Adesina is one of Crossword Fiend's team of bloggers, has a sports website, and his catchphrase is "Sports will make you smarter." I, on the other hand, am fond of saying that "(Almost) everything I know about sports I've learned from crossword puzzles!" I was pleased to actually know most of the sports content in today's puzzle. Joking aside, I think what this quiz nicely illustrates is that crosswords - at their best - are a collaborative effort between constructors and editors. I remember when I first started constructing, I was sad when my clues were changed by an editor, with no input from me. Since then I've had the rewarding experience of working with editors that provide feedback and encourage conversation about clue changes. This process results in a better puzzle. Anyway, I digress! I enjoyed today's puzzle with it's three solid theme answers featuring a variety of CUTs. I also liked the answers ANIMATE, PUFFY, PESKY, BAIL FUNDS, and LIVE BALL. This puzzle was a delightful way to begin my Tuesday - thank you, Ade, Brooke, and Erik!