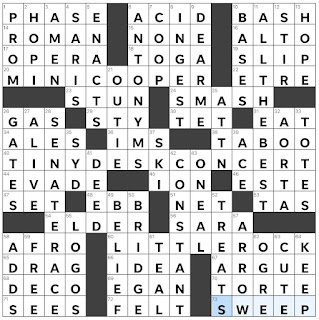 Although ANTONYMS (6D: In and out, e.g.) is an answer in today's puzzle, it is synonyms that are featured in the theme. These theme answers may START SMALL, but they are all solid and interesting entries. It's interesting to note that we've seen the title of this puzzle, STARTING SMALL, previously, used with a different theme approach. (I just mentioned the other day that it might be interesting to have a set of puzzles with the same title and different approaches to the theme.) In addition to the theme, I enjoyed ALL THE BEST, DEAR ME, and TABOO. The fill today was extremely smooth, just as we've come to expect from USA Today puzzles. This puzzle was an enjoyable way to begin my Thursday.
Rafael Musa