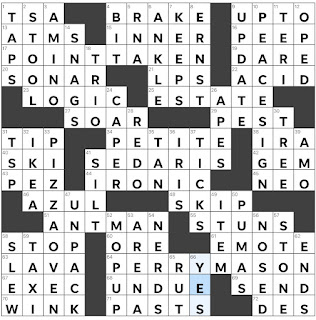 Theme Answers:
POINT TAKEN (17A: "I see what you mean!")
PERRY MASON (64A: Fictional veteran whose name is an anagram of "army person")
PEACE SIGN (10D: Two-finger gesture in the shape of a V)
PIZZA OVEN (33D: Appliance in which calzones are cooked)
Theme synopsis: Each theme answer is WRITTEN IN PEN in the sense that one or two of the letters of the word PEN appear at the beginning of each theme answer, with the remaining letter(s) found at the end of the answer.
And now a word from our constructor:
Mark: I'm thrilled to be making my solo debut as a crossword constructor in today's USA Today. I'm so thankful for the Crossword Puzzle Collaboration Directory which allowed me to connect with Erik Agard who was so generous with his time to introduce me to constructing. Erik then connected me with Brooke Husic, who I have co-constructed every published puzzle with. I've been so lucky to learn under her mentorship since we met virtually in April. So, even though it's my first solo puzzle, it's very much a tribute to Erik's editing and Brooke's mentor-friendship.
Happy Solving!!
Things I learned:
Random thoughts and interesting things:
Geography review:
I solved today's puzzle using the USA Today app, but I felt like I should have printed it out and solved it - using a PEN, of course. A fun theme with four solid theme answers; my favorite was POINT TAKEN, followed closely by PIZZA OVEN. (PIZZA is one of my favorite foods.) My favorite clue today was (44A: Like naming a fish Fluffy) for IRONIC. From a constructing standpoint, with two 10-letter and two 9-letter theme answers, placing two answers Across and two Down is a choice that allows greater flexibility, as each theme answer is essentially in its own corner. We've seen USA Today crosswords by Mark Valdez previously, but this is the first solo construction by Mark, so that was fun to see. This puzzle was an enjoyable way to begin my Monday.
Mark Valdez