Title: THAT'S QUITE A SCHLEP! 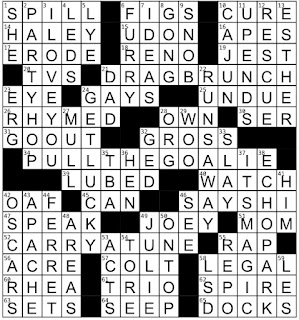 Theme Answers:
DRAG BRUNCH (21A: Event with mimosas and pop diva impersonations)
PULL THE GOALIE (34A: Risk an empty netter, in hockey)
CARRY A TUNE (52A: Sing on key)
Theme synopsis: The first word of each theme answer is a synonym for SCHLEP: DRAG, PULL, CARRY.
And now a word from our constructors:
Brooke & Amanda: In our last episode things got steamy; now we're doing the stride of pride home, in more ways than one. This puzzle, as I'm sure you can tell from the overall vibe, was an absolute blast to make together. Who says Pride has to end when June ends? Or, you know, we can move on.
Things I learned:
Random thoughts and interesting things:
Geography review:
In spite of its title, this puzzle was not a SCHLEP at all. Though the theme is straightforward - and there's nothing wrong with that - it is definitely elevated by interesting fill and cluing. There is definitely a PARTY HOP  vibe here, complete with a DRAG BRUNCH and a FERRET dancing. I particularly enjoyed the answers I LOVE YOU and IT'S MAGIC. We did indeed GET LUCKY today with this delightful puzzle.
Amanda Rafkin Brooke Husic