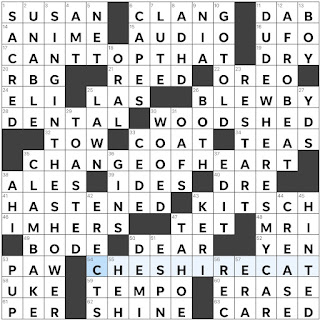 Theme Answers:
CAN'T TOP THAT (17A: "You've got me beat!)
CHANGE OF HEART (35A: Attitude reversal)
CHESHIRE CAT (54A: "Alice in Wonderland" character who vanishes and reappears)
Theme synopsis: Each theme answer is contained within the word CHAT.
Things I learned:
Random thoughts and interesting things:

It was a joy to see Amanda Rafkin's name as the constructor on today's puzzle. Although we've seen her name many times as editor, and a couple of times on collaborations recently, this is her first solo construction since June 5. And what a lovely puzzle it is! Three great theme answers that were all a delight to discover. The two grid-spanning down answers of SING IN THE SHOWER and DUDE, WHERE'S MY CAR? were a fabulous bonus. Amanda managed to fit in three musical references today - SUSAN Egan, DEAR Evan Hansen, and CLAMBAKE - and I always enjoy that. This puzzle was a delightful way to begin my Tuesday.
Amanda Rafkin