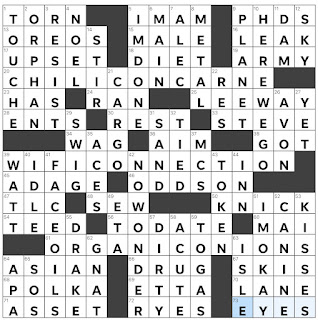 Theme Answers:
CHILI CON CARNE (20A: Spicy stew at a cookoff)
WIFI CONNECTION (39A: Hotspot offering)
ORGANIC ONIONS (61A: Some 20-Across ingredients)
Theme synopsis: The word ICON is found HIDDEN in each theme answer.
Things I learned:
Random thoughts and interesting things:

My title-based guess of the theme was correct in the type of theme, but incorrect in specifics. My guess was that the HIDDEN IMAGE would be the word "pic" found in the theme answers. Instead, I realized as I filled in CHILI CON CARNE, we have the equally-appropriate ICON. (I was distracted for a bit, wondering how many different themed puzzles you could make with the same title. This is an idea for a set of puzzles that would either be interesting, or boring in its repetitiveness, depending on execution, I suppose.) I enjoyed the answers HERE WE GO and TOUCHE. This puzzle was a fine way to begin my Sunday.
Zhouqin Burnikel