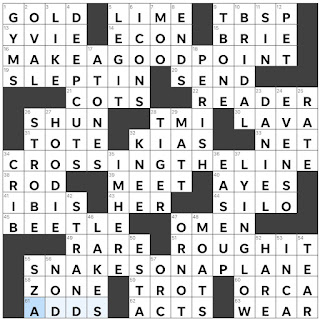 Theme Answers:
MAKE A GOOD POINT (16A: Say something useful)
CROSSING THE LINE (34A: Going too far)
SNAKES ON A PLANE (55A: Samuel L. Jackson Film that was almost called "Pacific Air Flight 221")
Theme synopsis: The FINAL word of each theme answer is a GEOMETRY term. We have POINT (represented in GEOMETRY by a single dot), LINE (defined by two POINTs), and PLANE (an infinite set of POINTs forming a flat surface).
And now a word from our constructors:
Malaika: Shoutout to the Queen of Crosswords for offering to collab with me the first time we ever spoke, and then patiently waiting many months for me to finally take her up on it. I like that Brooke and I both do some amount of math for our jobs, and this is a math puzzle. I also like the title that Brooke came up with. I also also like DEEP CUTS and HOODIE as fill.
Brooke: I'm so happy this puzzle is out in the world! I'm super into Malaika's black square designs and am very grateful to her for sending me not just one but three gorgeous grid templates to choose from for this theme set. I love all three theme answers and my fave clues are for LIME and LAVA.
Things I learned:
Random thoughts and interesting things:

A nice math theme today with a solid (I couldn't resist...) set of theme answers. Here's a link if you need a refresher on GEOMETRY and POINTs, LINEs, and PLANEs. I liked seeing a couple of math-related bonuses in ADDS and OVAL. EVEN SO, I also liked LYING LOW, PERISH (the thought), and the sassy ...OR NOT. This puzzle was a great way to begin my Wednesday.