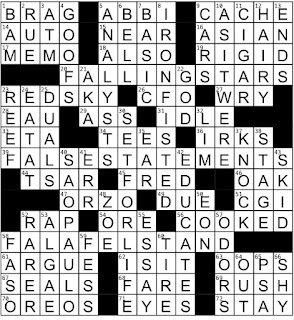 Theme Answers:
FALLING STARS (20A: Meteor shower sights)
FALSE STATEMENTS (39A: Untrue assertions)
FALAFEL STAND (58A: Spot to grab a Middle Eastern sandwich)
Theme synopsis: The first word of each theme answer begins with FA-, and the second word begins with ST-. Put together, the two words of each theme answer have a FAST START.
Things I learned:
Random thoughts and interesting things:

Geography review:
Yesterday's puzzle gave us a HEAD START, and today we have a FAST START. That's fun! I liked that the theme was of a different type than yesterday's puzzle. I liked the entries AS IT WERE and SET FOR LIFE. This puzzle was an enjoyable way to start my Wednesday.
Zhouqin Burnikel