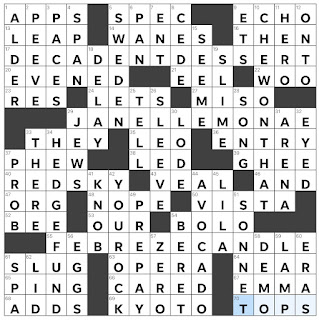 Theme Answers:
DECADENT DESSERT (17A: Food that might be described as "sinful")
JANELLE MONAE (29A: "Dirty Computer" singer)
FEBREZE CANDLE (55A: Wicked air freshener)
Theme synopsis: The START of each theme answer is the abbreviation of a WINTER month. Appearing in order, we have DEC, JAN, FEB.
Things I learned:
Random thoughts and interesting things:

When I saw Zhouqin Burnikel's name on today's puzzle, I briefly wondered if I was confused about the day of the week, since we usually see her byline on Wednesdays and Sundays. When we see a Zhouqin Burnikel puzzle on other days, there's usually a specific reason, as is the case today. Appropriate to see this START OF WINTER puzzle today, on the WINTER solstice. This appropriately-themed puzzle was a great way to begin my Tuesday.
Zhouqin Burnikel