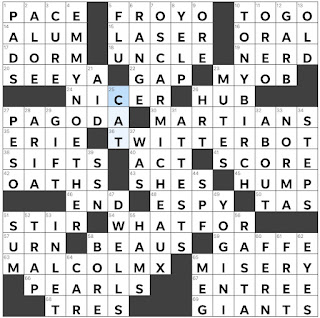 Theme Answers:
EMMY NOETHER (4D: German mathematician with an eponymous theorem)
OSCAR MICHEAUX (7D: "The Homesteader" filmmaker)
TONY BIRCH (10D: "The White Girl" author)
Theme synopsis: The TOP word of each vertical theme answer is an AWARD. Our puzzle has won EMMY, OSCAR, and TONY AWARDS.
And now a word from our constructor:
Brooke: although other asymmetric puzzles have run before this one, this was one of the first asymmetric grids i made. i really like being able to put in long "bonus" answers like TWITTER BOT and MALCOLM X without having to worry about finding clean fill for what would be the symmetric partners of those grid sections. i read it awhile ago, but "When the Emperor was Divine" really stuck with me and i'm glad to have the chance to include it. many thanks to amanda for editing!
Things I learned:
Random thoughts and interesting things:

This puzzle is only a Grammy AWARD short of having an EGOT. A fun collection of AWARDS here found in the names of notable people unrelated to those AWARDS. In addition to the answers highlighted above, I liked TWITTER BOT and FROYO. I also enjoyed the clue for HUMP (45A: Part of a camel costume). This puzzle was a great way to begin my Saturday.
Brooke Husic