Title: THE FALL OF MAN 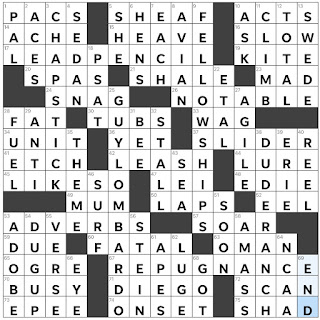 Theme Answers:
CHAPSTICK (3D: Lip balm brand)
FELLOWSHIPS (9D: Paid post-grad positions)
GUY LOMBARDO (25D: Bandleader known as "Mr. New Year's Eve")
DUDE RANCH (38D: Western resort)
Theme synopsis: The beginning of each theme answer features a synonym for MAN: CHAP, FELLOW, GUY, DUDE. Since the theme answers are vertical, these words are FALLing in the puzzle.
Things I learned:
Random thoughts and interesting things:
Geography review:
It's been almost seven months since we've seen a Lynn Lempel puzzle, and I was delighted to see her byline today. Today's title perfectly tipped me off about what to expect, and I was not disappointed. This is a great set of theme answers. When I first looked at the grid, I wondered if MAN would be falling down that nice diagonal slide formed by the black squares in the middle of the grid. In addition to those mentioned already, NOTABLE answers today include REPUGNANCE (not my reaction to this puzzle!), LIKE SO, and HEAVE. This puzzle was an enjoyable way to begin my Saturday.
Lynn Lempel