Title: THE FALL OF ROME 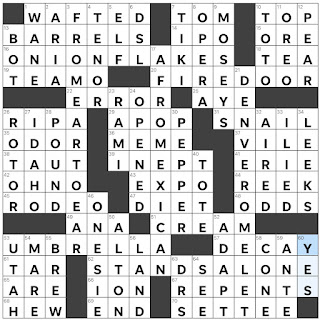 Theme Answers:
FROM EAR TO EAR (3D: Like a full-face smile)
AFRO-MEXICAN (17D: Lupita Nyong'o, ethnically)
DENVER OMELET (21D: Egg dish with ham, onions and green bell peppers)
Theme synopsis: Each theme answer contains the word ROME. Since the theme answer are vertical, and ROME appears progressively later in each theme answer, the word ROME appears to be FALLing as we progress through the puzzle.
Things I learned:
Random thoughts and interesting things:
Geography review:
I enjoyed seeing THE FALL OF ROME depicted visually in today's puzzle. Great theme answers today, as well; it's hard to read FROM EAR TO EAR and not smile. The horizontal answer of STANDS ALONE was also nice. This puzzle was a fine way to begin my Sunday.
Zhouqin Burnikel