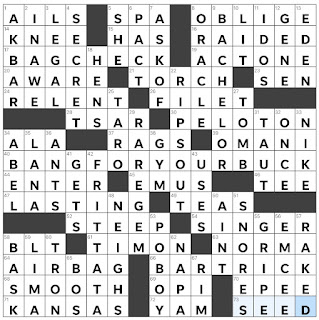 Theme Answers:
BAG CHECK (17A: Airport procedure that involves a scale)
BANG FOR YOUR BUCK (40A: Good value)
BAR TRICK (66A: Turning water into whiskey, e.g.)
Theme synopsis: Each theme answer cuts the word BACK, placing the BA- at beginning of the answer, and the -CK at the end.
Random thoughts and interesting things:
Geography review:
There was so much in this crossword I wanted to highlight and talk about that I had to CUT BACK! I highlighted plenty anyway, as you can see, but I didn't even talk about BANG FOR YOUR BUCK - a nice grid-spanning theme answer. I also haven't yet mentioned how much I like the clue for SHE (5D: Nevertheless, ___ persisted"). I enjoyed all of the musical references in today's puzzle. Scott Joplin, Lizzo, Paramore, LANA Del Rey, and my addition of "Hakuna Matata" - a little something for everyone. This puzzle was a delightful way to begin my Tuesday.
Rafael Musa