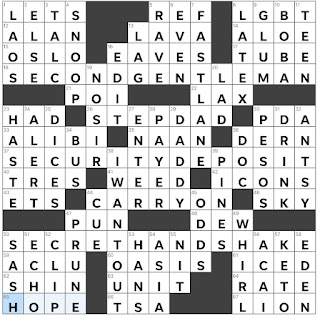 Theme Answers:
SECOND GENTLEMAN (18A: Title for a vice president's husband)
SECURITY DEPOSIT (37A: Expense you might get back after moving out)
SECRET HANDSHAKE (50A: Greeting known only to group members)
Theme synopsis: Each of the three theme answers begin with the letters S-E-C.
Things I learned:
Random thoughts and interesting things:
Geography review:
True story - when I finished this puzzle, I said, "Well, that was lovely." A straightforward and enjoyable theme with solid and fun TRIPLE grid-spanning entries beginning with SEC. The fill was smooth all-around, as we expect from USA Today puzzles. I enjoyed the cluing a lot today: ALIBI (33A: "Couldn't have been me" story), PUN (47A: "Need an ark? I Noah guy!," e.g.), and LATEX (8D: Catwoman suit material, maybe) are just three stellar examples in addition to the entries I've highlighted above. This puzzle was definitely a delightful way to begin my Thursday.
Rafael Musa