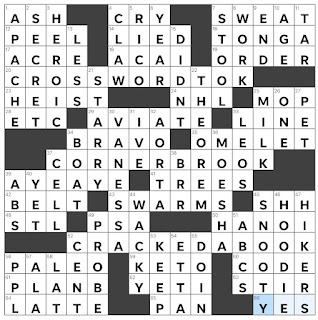 Theme Answers:
CROSSWORDTOK (20A: Hashtag for Katie Grogg's clue explanation videos)
CORNER BROOK (37A: Newfoundland city)
CRACKED A BOOK (52A: Started to study)
Theme synopsis: The word CROOK (presumably a lying CROOK) is found on the OUTside edges of each theme answer.
Things I learned:
Random thoughts and interesting things:
Geography review:
I enjoyed the title of today's puzzle, with the variant spelling of "outliers" tipping us off to the theme. A nice set of theme answers, with the word CROOK being broken differently in each answer. There was a lot to like in the puzzle in addition to the theme, including the fun paired clues I mentioned above. I was happy to learn about Katie Grogg and #CROSSWORDTOK. The trio of vertical 6-letter entries in the upper left and lower right corners were especially nice. Also, this is a silly thing, but I like the L-shaped blocks of black squares at the bottom and top of the puzzle. This particular configuration always makes me think the puzzle has boots and antennae. This puzzle was a delightful way to begin my Thursday.
Erik Agard